So, what's Mahikari's True Light, okiyome, crap all about? It is supposedly coming directly to you from God Itself. Channeled through your omitama to your hand. Bypassing your filthy soul.

The Mahikari people (kamikumite, or kumite for short) spout off about it being a purifying energy, something that can dissolve toxins from your body, your cat, your garden, your food, your school, your home, the road, and even your car. Because it's so fucking great and miraculous, you need to do it a lot. A LOT. Like, every day. A lot.

If you're really devoted proper like, you're supposed to give and receive at least a basic session of okiyome every day. So you need at least one willing victim, I mean, subject. And you ideally need to hook up (not in a fun sexy way) with another kumite who can give you a session of okiyome too.

A ‘basic session’ of okiyome takes 30 minutes. It starts with both of you bowing and clapping and saying prayers. If you're hard core, you'll both be kneeling on the ground, on thin mats. Otherwise, on chairs facing each other. 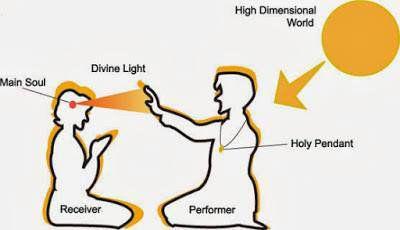 Then the subject closes their eyes and puts their hands together. The kumite then recites a really long prayer in invented ‘ancient Japanese’ rubbish. It takes over a minute to recite. They say it’s in an incredibly ancient language, which is why modern Japanese people can’t understand the mystical sounds and meaning. Uh huh. Or maybe it’s just cos you MADE IT UP. The Divine World Prayer, or Amatsu Norigoto. I can still recite huge chunks of it, cos memorising this bullshit was one of the first tasks you had to do if you wanted to join. And I chanted at least once a day, if not more often (more was always better!) for over a decade! Wish I could get it the fuck out of my head. Here’s an explanation of sorts.

Once the prayer is over, the session starts with radiating this mysterious non-existent energy towards the subject's ‘main soul’ (third eye, forehead etc), for ten minutes. During this time the subject has to keep their eyes closed, and the kumite has to visualise a stream of golden light, streaming from their hand through the person’s head, focussed on a spot in the middle of the skull. All sorts of imagining of love, and grace, and positive intent too. 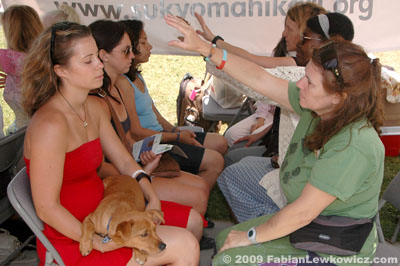 At the end of ten minutes, the kumite does a rather dramatic gesture. The big thing when you’re giving okiyome to the soul spirit is that the attaching spirits (THAT’S a whole ‘nother blog post) on the recipient are also receiving Light at the same time, and they might be getting upset, or sad, or chucking a tantrum, or feeling angry or generally trying to affect the recipient and their mind more than usual. So you have to get these spirits to calm the fuck down! This is achieved by the giver sweeping both hands in an upside down V shape from the recipient’s head, to the ground, three times, and saying ‘Oshizumari!’ very loudly with each sweep. THAT’LL DO IT, LADS!

After this, the person turns around, and they get Light radiated to the back of their neck, in two spots on each side of the neck. To help with blood flow to the brain. APPARENTLY. And then they get to lie down, the best part, and receive Light on their kidneys. Nice time to drift off for a bit of a nap. That’s a basic session.

If you’re going for a full session, you can receive an extra 20 minutes of Light to other parts, so if you have a rash, you’d get extra Light there, or whatevs. There were whole classes on where to give Light to for all sorts of different conditions. All of it ridiculous, of course. There has been some attempt by the organisation to remove itself from initial claims about being able to cure things, and they now use 'spiritual purification' instead. Too many lawsuits, hmmm? 🤔

I just realised why I hate wearing watches now ... we always had to wear a watch, to time our sessions. Huh.