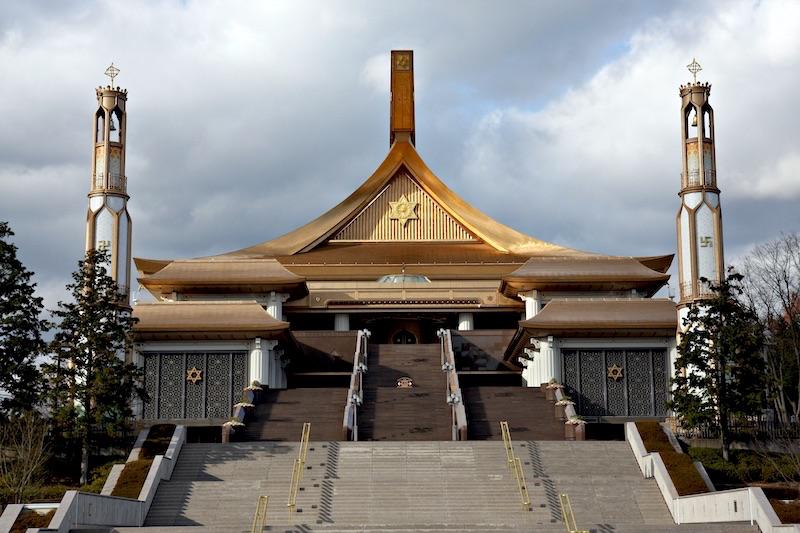 You probably didn’t know this, but The Main World Shrine, yes folks, for all of us, was built by Sukyo Mahikari, in Takayama, Gifu Prefecture, in the Japanese Alps. It’s all very impressive. It’s called Suza (where Su God, the head honcho, dwells), or Sekai So Honzan (Main World Shrine) — their new age ‘Solomon’s Temple’.

I’ve been there. As an indoctrinated member (kumite), it was certainly a memorable experience. I’d never been to Japan before. There was a small group of us travelling from our Dojo (Mahikari Centre) in Europe. Demonstrating our utter devotion by travelling so far. Luckily one of them was Japanese, so we had a translator with us. This isn’t a travel blog, so I’ll just say that Japan itself was an exciting place to visit, delicious meals, stunning scenery, oozing history and culture and so on. I’d like to go again one day without being a cult member. That skewed my view of the whole thing.

We were attending the Autumn Grand Ceremony at Suza that year, so there were thousands of kumite from all over the world there. It is an odd place. It’s supposed to unify all the world’s religions. 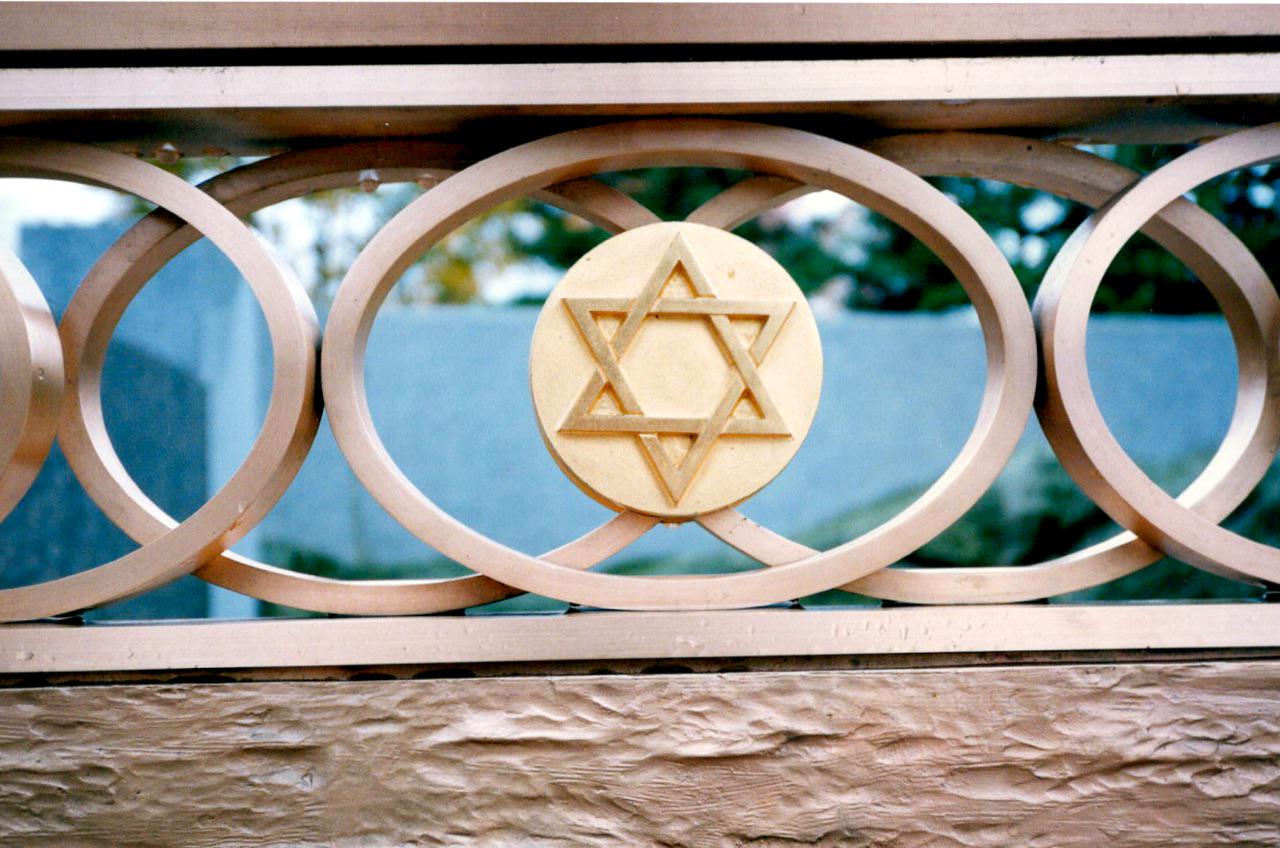 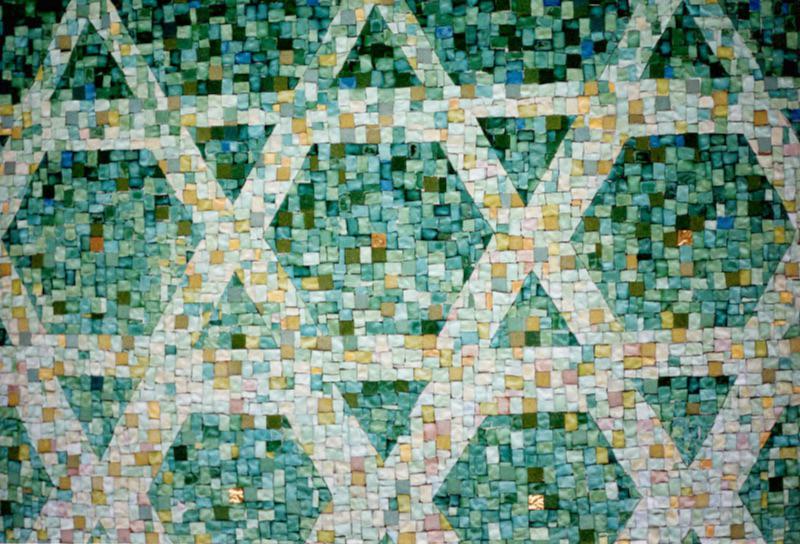 We made new friends, from New Zealand, America, Canada, Australia, Brazil, France, all over the place. We commiserated with our new friends who had family who objected to their involvement. We were brothers and sisters in solidarity. Buses brought in droves of us. We were organised and corralled into groups, climbing the millions of steps as a group. Row upon row of Mahikari Tai (the youth group) in their uniforms (you can see a tiny portion of them in the photo below). 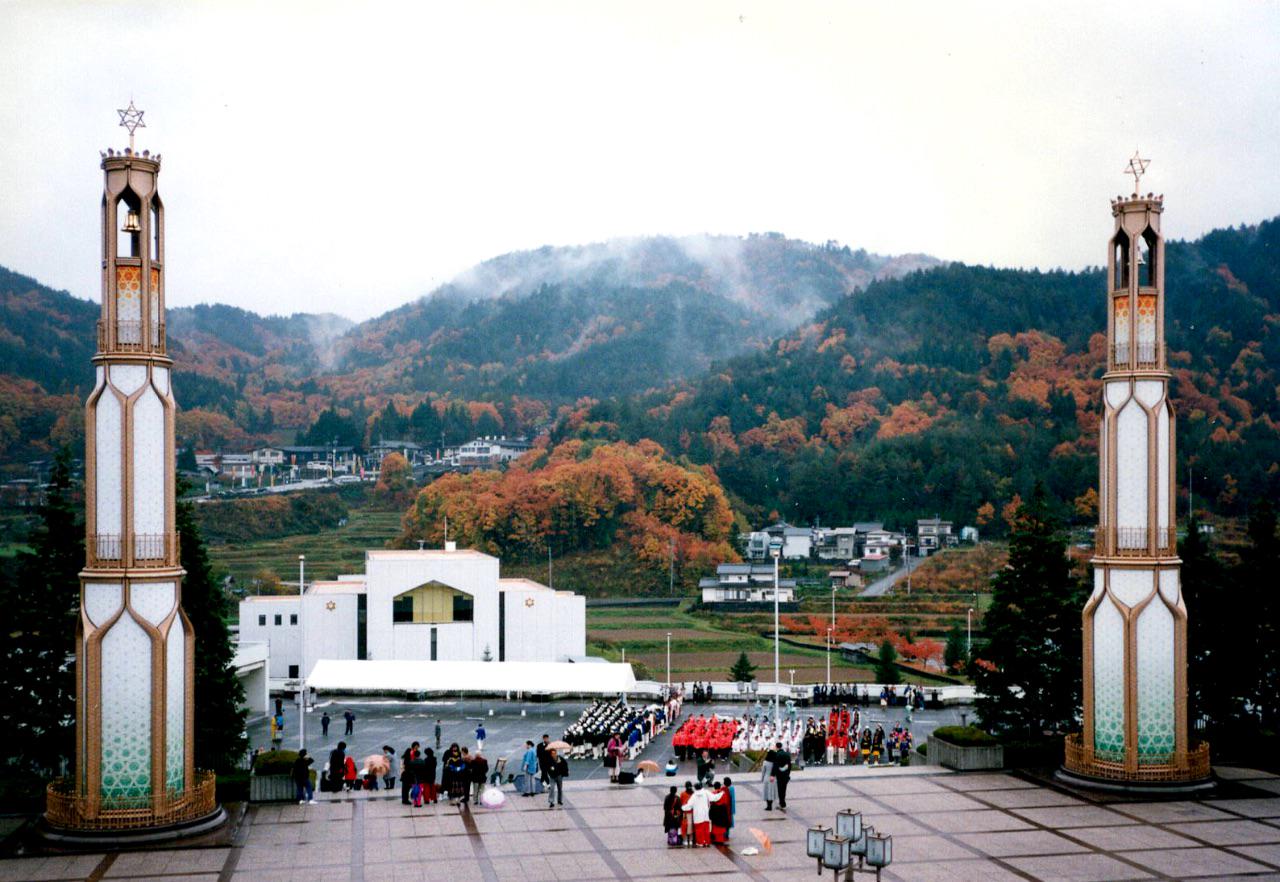 Thousands of people in the massive ceremony hall, chanting in unison. It was intense. Mostly thousands of Japanese, but we gaijin got special seating near the front. The stage has a massive fish tank filled with carp underneath it. To symbolise the ‘horizontal water aspect’ of the Mahikari cross (blue horizontal line). The golden altar on the stage represents the red vertical ‘fire’ aspect. There are pine trees growing next to the altar. On the stage. Yep … not even joking. 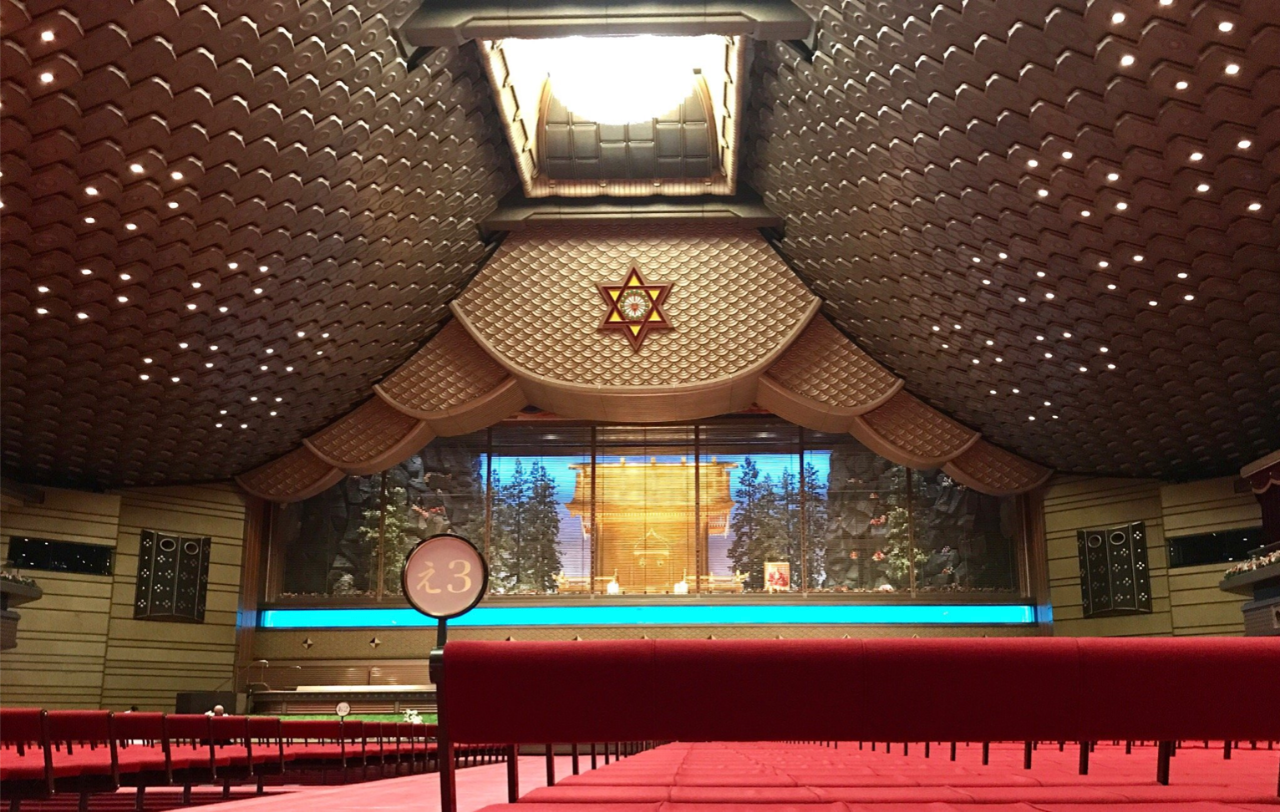 Okada, the founder dude, decided that God had given him a covenant to build the Main World Shrine. Cos the Jewish people had fumbled on that duty. According to Okada’s version of the Bible, anyway (this is never actually mentioned anywhere in the actual Bible, and kumite took him at his word, which was the word of God, right? So no need to check).

Okada explained that the ongoing persecution of the Jewish peoples was the consequences of them dropping the ball when it came to building a shrine. Nice to have it all explained, huh? This was also the leverage for pushing members from earlier times to donate as much money as they could to get this shrine built. And to keep making donations to complete the full construction plan and pay for maintenance and improvements. It needed a lot money. Probably still does, I'm betting.

This is what Okada himself had to say:

So, I have something that I want to ask of you. I have been given the divine command to build Suza. I have made a covenant with God. And because I have made that covenant, I must, no matter what happens, fulfil it.
Daiseishu — 1993 English version p218-219 (Japanese version 1983)

By 'I must' he means 'you suckers must', of course.

It was a “covenent”, guys. Based on lies. Okada’s version of the Bible was, let’s just be charitable here, incorrect, self-serving and fucking wrong.

The most wonderful thing happened, though, in 1974. Okada died. And there was a fight over the leadership of the group, and his organisation split into two groups. Splitters! And both of them built a Main World Shrine. Both of them enshrined the Creator God. Both of them built their shrines in the ‘most spiritually significant place’ indicated by Okada. (Surprise! The plural in this blog post title is not a typo!)

So. The group Sekai Mahikari Bunmei Kyodan, known as SMBK or the World Divine Light Organization (which was Okada’s original group), established their Suza at Amagi, Izu (Shizuoka, Japan). It was inaugurated on 23 August 1987 But the new faction’s Sukyo Mahikari Suza in Takayama was inaugurated on 3 November 1984, beating its rival by nearly three years. Good going, guys. Winning. 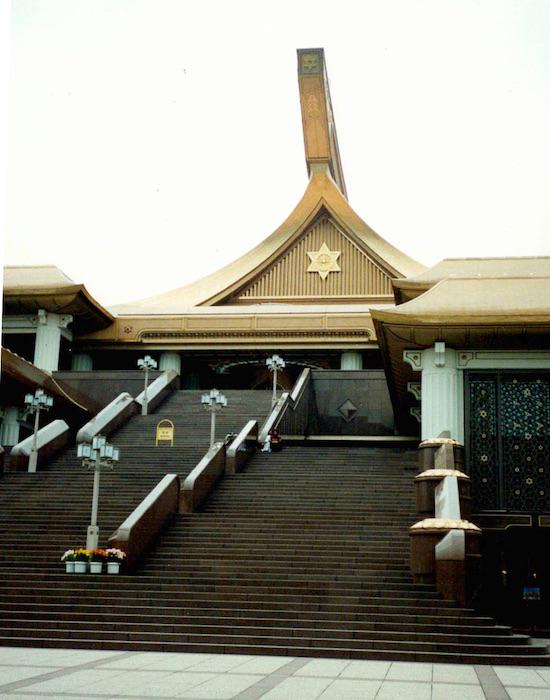 There’s not much recent chatter about these places online (or about Mahikari in general). (Come on other ex-members. We need to keep the conversation going! I know you're out there.)

Here’s what I could find:

A lot of the positive reviews are written by cult members, so take those with a teaspoon of salt (both of which will make you throw up, by the way). Here’s some choice quotes from the more candid ones:

Well the temple is bonkers. I was going to describe it as Alice in Wonderland meets the Scientologists but felt that was a little unfair as I had never been to a cult temple before!

… the whole experience was low-key terrifying and confusing. The use of swastikas, the star of David, a fish tank, and military uniforms meant that it was very memorable.

We were told by our guide that we must not reveal our true identities or leave email addresses here … I personally was totally unprepared for what greeted us on arrival and have to say I found the whole experience somewhat sinister and unnerving.

Personally … it seems to me these guys are the Scientologists/Later Day Saints of Japan.

(By the way, the Folk Village is brilliant. Do recommend.)

If you want to read more about these dramas in detail, check out the full blog post on Mahikari Exposed over here and Building the Main World Shrine — using the Bible. They cover the revelations about why the Jewish people have been persecuted through the ages (you always wanted to know, didn’t you?) and how Mahikari has now saved us all by doing the Jewish peoples' job for them, and building this temple for the world.

(Unless otherwise noted, the photos were supplied to us by an ex-member.)