A lot of Mahikari's teachings focus around the process of cleaning our spiritual, astral and physical bodies of all the disgusting sins and impurities that currently pollute everything about us. It's a rather confusing topic, so I've made this ridiculously oversimplified diagram to help clarify things. 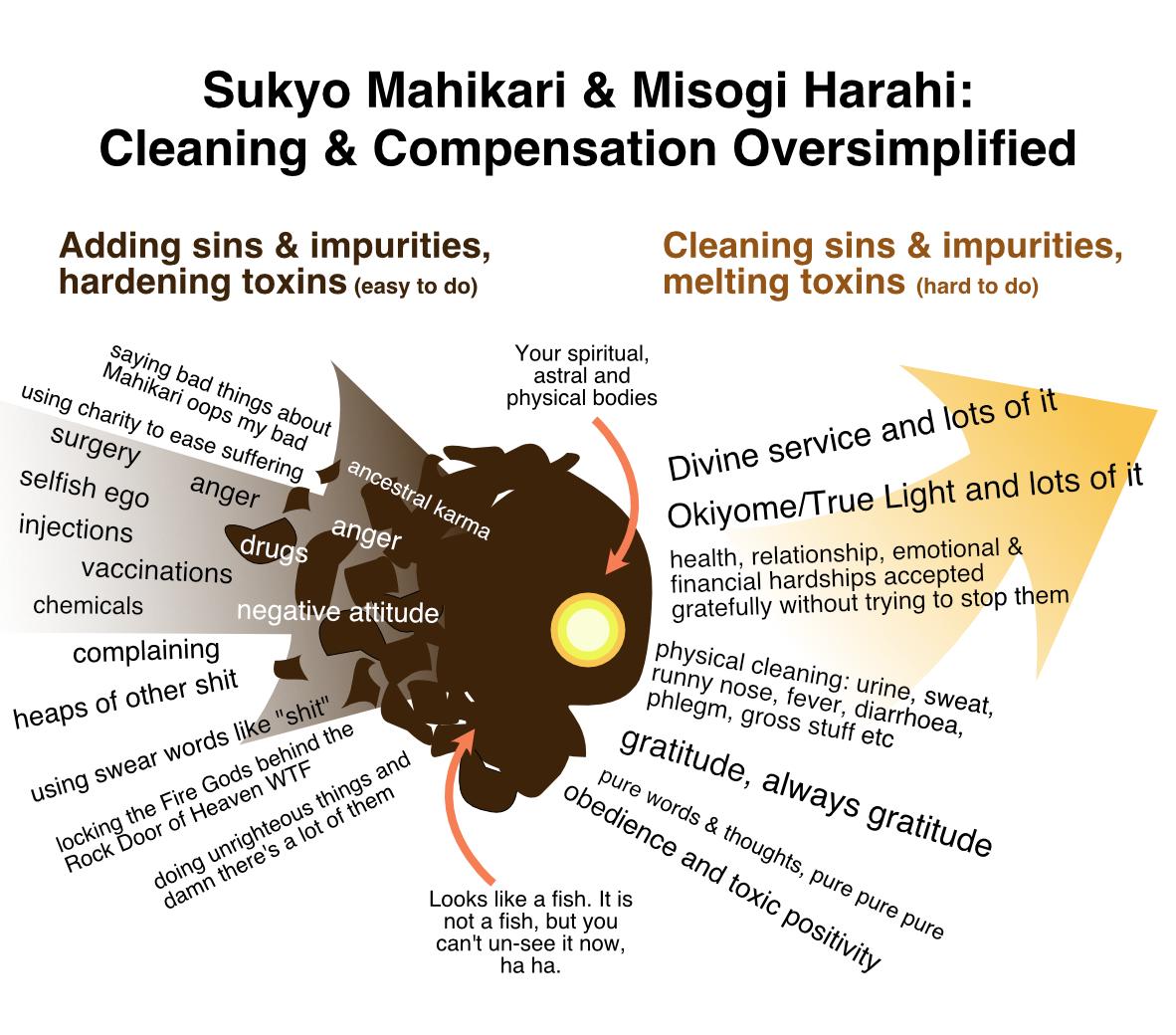 Still confused? Don't worry, Mahikari has a lot to say about Misogi Harahi. A lot.

Here's a basic definition from the Primary Kenshu (initiation course):

Some more from Kenshu:

In the same way you yourselves have impurities. Therefore, if you have any disease or illness, any kind of continuous suffering or turmoil, disasters that go on and on, that is, if unhappy phenomena are happening to you or your family, it means that impurities are now being shown like this because in your previous lives you yourself or your ancestors made other people suffer, or harmed or killed them. And such sins and impurities have accumulated.

Maybe some teachings from their book of holy words, where Su God is speaking directly to Okada (the founder), will help?

The earth is contaminated fully with spiritual poison, producing a foul scent in the Divine Realm. The very time is approaching when I cannot but carry out the great MISOGI-HARAHI of this earth. Do humans recognize a means to stop this chaos with their intellect and power? Unfortunately they do not. They will end up being blown away.

Nowadays there are too many in the human world who are controlled by evil spirits. Therefore, due to my intensifying the Divine Light, the compensation phenomena will become more serious and widespread. Many souls in the three worlds of the Divine, Astral, and Physical will begin to feel uneasy, thus, “the Age of anguished resistance (AGAKI)” shall come. Consequently, in the human world, chaotic and aberrant phenomena will ceaselessly increase. Thus, NINGEN will continue to create the cause of twofold and threefold sufferings and plunge into agony. This is, indeed, the self-inflicted suffering. It cannot be avoided since the great spiritual cleansing (MISOGI) has started. They do not realize until I cleanse them. They must be forced to go through compensation (AGANAHI) with the Power of Spirit and Fire, unless they realize this by themselves and start making voluntary compensation (AGANAHI). Otherwise, they cannot complete the cleansing to develop the Positive Spirit (HARAHI); and furthermore, they cannot bring about the positive world of pure spirits (AKANAHI) forever.

You may well think that God takes cruel action; however, it is not so. It is a manifestation of God's Great Love for eternity that the Arrangements have been set by the Law to let them end up in such a result. To begin with, these Arrangements had begun to be planned and set in motion at about the end of the creation of Heaven and Earth, that is, around the time when God began to create HITO. Therefore, it is not an arrangement that has been and will be able to be made by NINGEN who is so vain and conceited as to say, “God has been made up by NINGEN.” On the contrary, he will eventually go rampant in accumulating sins toward the Celestial World (AMATSU-TSUM1) and the Terrestrial World (KUNITSU-TSUMI) and leaving the negative karma to his descendants. Besides, he, himself, will have to go through suffering for hundreds of years in the astral world; and his bereaved family and descendants will have to suffer from worry, distress, and calamity in this world until their compensation can be completed. Thus, both of them have to go through the cleansing (MISOGI) together. It is due to God's “necessary evil” that is the goodness in MAHAYANA (in the Light of God).

Anyway, here's how you compensate, according to Primary Kenshu:

Even if you say you haven't done a single bad thing ever since you were born into this world, still, if the impurities from your ancestors have not been completely erased, these impurities are transmitted to you. Therefore you need to have Misogi, that is, to scrape off the impurities of the spirit. And if you don't have aganahi, you can't become a bright spirit. Well, the point is that one's life will be completely different depending on whether one goes through aganahi willingly and actively or receives it passively.

With passive compensation the impurities committed must nevertheless be scraped off. Therefore, if a person killed someone or something like that previously, he would have to have a major accident, for example, and have his leg amputated and suffer for the rest of his life with a disabled body. Or he may have to have a horrible face injury, and by living the rest of his life with an ugly face, going through a lot of insults and shameful experiences, he continues to apologise and pay for the sins he committed. Or, he might have to suffer from, say, cancer or be paralysed from stroke and so on.

Then there follows a bunch of stories about how kumite who were destined to have serious accidents to erase their sins and impurities ended up just having minor accidents instead, because they offered divine service.

In this way, major disasters change into minor ones, and minor disasters change into no disasters at all. In other words, if a person devotes himself wholeheartedly to serving God, that is, continues compensating actively, he will erase his impurities. Even though he is receiving the same compensation, the suffering will be rather small. Well, after this kenshū I hope you'll become involved in active and willing service for God.